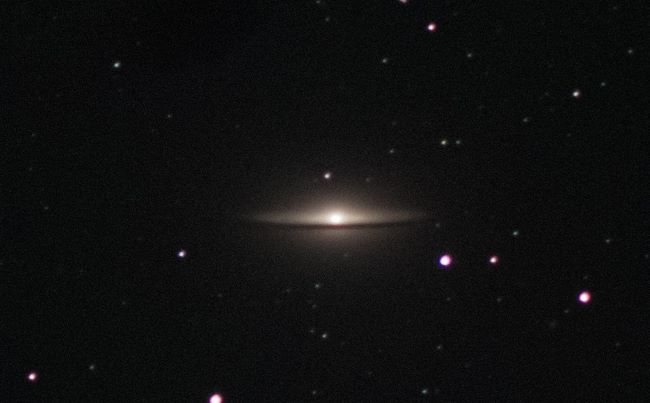 The Sombrero Galaxy (also known as Messier Object 104, M104 or NGC 4594) is a peculiar galaxy of unclear classification in the constellation borders of Virgo and Corvus, being about 9.55 megaparsecs (31.1 million light-years) from our galaxy, within the local supercluster. It has a diameter of approximately 15 kiloparsecs (49,000 light-years), three-tenths the size of the Milky Way. It has a bright nucleus, an unusually large central bulge, and a prominent dust lane in its outer disk, which is viewed almost edge-on. The dark dust lane and the bulge give it the appearance of a sombrero hat. Astronomers initially thought the halo was small and light, indicative of a spiral galaxy; but the Spitzer Space Telescope found that the dust ring was larger and more massive than previously thought, indicative of a giant elliptical galaxy. The galaxy has an apparent magnitude of +8.0, making it easily visible with amateur telescopes, and is considered by some authors to be the galaxy with the highest absolute magnitude within a radius of 10 megaparsecs of the Milky Way. Its large bulge, central supermassive black hole, and dust lane all attract the attention of professional astronomers.