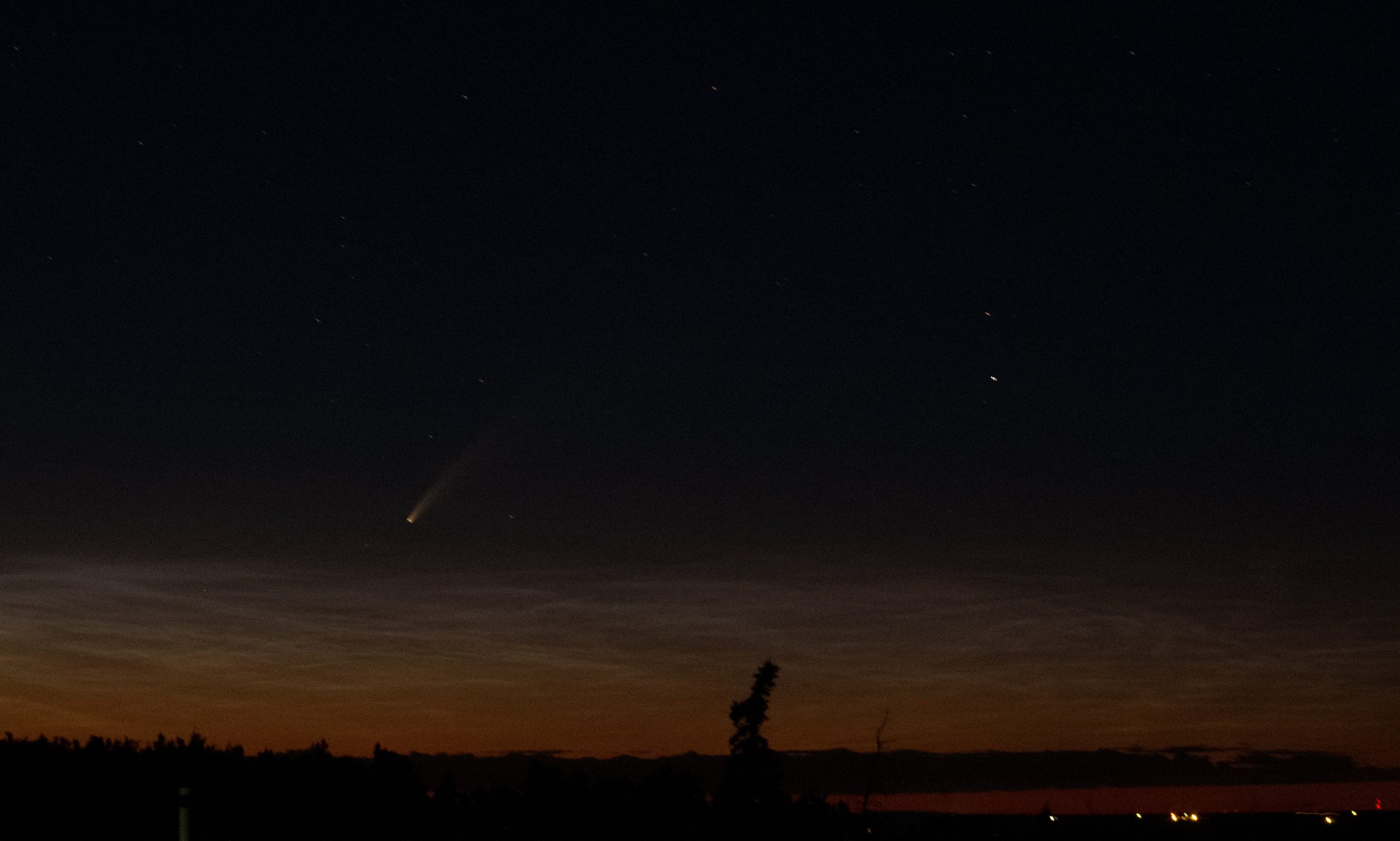 Comet Neowise with NLC clouds in 2020

NEOWISE is known for being the brightest comet in the northern hemisphere since Comet Hale–Bopp in 1997.[4] It was widely photographed by professional and amateur observers and was even spotted by people living near city centers and areas with light pollution.[5] While it was too close to the Sun to be observed at perihelion, it emerged from perihelion around magnitude 0.5 to 1, making it bright enough to be visible to the naked eye.[6] Under dark skies, it could be seen with the naked eye[7] and remained visible to the naked eye throughout July 2020.[8] By July 30, the comet was about magnitude 5,[9] when binoculars were required near urban areas to locate the comet.

For observers in the northern hemisphere, the comet could be seen on the northwestern horizon, below the Big Dipper. North of 45 degrees north, the comet was visible all night in mid-July 2020. On July 30, Comet NEOWISE entered the constellation of Coma Berenices, below the bright star Arcturus.

Noctilucent clouds, or night shining clouds, are tenuous cloud-like phenomena in the upper atmosphere of Earth. When viewed from space, they are called polar mesospheric clouds (PMCs), detectable as a diffuse scattering layer of water ice crystals near the summer polar mesopause. They consist of ice crystals and from the ground are only visible during astronomical twilight. Noctilucent roughly means “night shining” in Latin. They are most often observed during the summer months from latitudes between ±50° and ±70°. Too faint to be seen in daylight, they are visible only when the observer and the lower layers of the atmosphere are in Earth’s shadow, but while these very high clouds are still in sunlight. Recent studies suggest that increased atmospheric methane emissions produce additional water vapor once the methane molecules reach the mesosphere – creating, or reinforcing existing noctilucent clouds.[1]

This image was taken the early morning hours early in the summer of 2020.   We see both the Comet and the Clouds in the same image. From a campground near Drumheller Alberta in Canada.