People that were instrumental in getting me into Astronomy 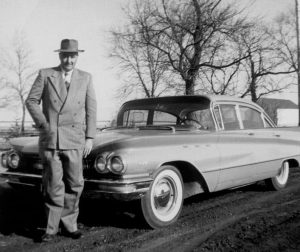 I like to tell the story of my Uncle Evert, my dad’s oldest brother and the role he has played in inspiring me to get into Astronomy.  When I was young and lived with my family on a farm in rural Manitoba. I used to spend my time out in the yard looking at the stars.   My Uncle Evert who had a Grade 8 Education and was for the most part a worker, farmer and tinkerer, stands out as one of the first people that inspired me, in fact he is directly responsible for me getting my first telescope and now my most recent telescope (the one I use now all the time for taking astro-photos.)  As he had no children of his own, he always spent lavishly on presents for his nieces and nephews.

When I was 10, I received the most amazing gift of a small telescope. I remember vividly as it happened yesterday that Christmas Eve in Small town Rural Manitoba where I immediately took that small telescope outside to look through it for the Andromeda Galaxy in the driveway of my Grandparents home.

He was always keen to look through my scope.   Later when I had obtained use of a 8″ reflector, he was one of the first people to come out and take a look.   Any story, any picture, and any drawing or sketch, he was always keen to see what I had to show, even later when he was confined to a wheel chair in his nursing home.

Announcing the Launch of my Astronomy BLOG

Launch of my Astronomy BLOG

I (Roger) first started a Web Log in 2010 when I moved to using the TheBlueGrid web domain for my work it was created as a work experiment with WordPress.  Since that time I have always contemplated creating one for my Astronomy hobby that would be focused on that.   In this way, I would get a chance to practice and get better at using WordPress for providing web solutions.  With this relaunch in November this process has begun. I will post articles of astronomical interest as we go forward,   I will also use this to post anecdotal details of other astronomical adventures from the past, so look forward to the addition of historical posts, which will be back dated when they are added.   And I have brought the articles from my former BLOG and added them here for items of note that were added between 2010 and 2017 …. Roger