Earlier this year I faced the difficult decision to replace my current cell phone at the time with a new phone, this time I wanted to purchase a phone that would give me ability to take pictures using my astronomical equipment, or just using a tripod of the night sky.  I began the search as any of us should do……. by asking Google (since is do not have a apple or amazon account)  A quick Google Search gave me a list of options to consider.    (i.e. I asked google “What is the best cell phone for Astronomy”) I was able to even get Google to point me at websites that presented side by side comparison between the leading choices.  Then I had to consider are the choices available through my cell phone provider.   This all happened around 8 months ago.  The choices now are different than the choices them.

At the time the choices I looked at were the latest Samsung (which I have owned in the past,) the latest LG (which was the brand of my current phone,) the Google Pixel, the latest Apple IPhone, and the latest Huawei – just to annoy Donald Trump.  I have been an Android users for ever, never having owned an Apple product, but I was willing to consider it if that was the best phone based on the performance reviews I found.

Google gave links to nice websites that provided side-by-side comparisons between the top products. and the winner was:

The first photo of a dark sky the next night, just point and shoot was impressive: 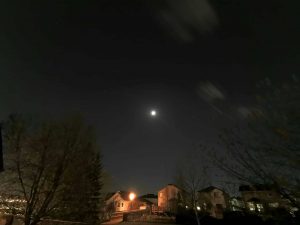 Next I tried a constellation shot from my back yard, which happened to be Ursa Major 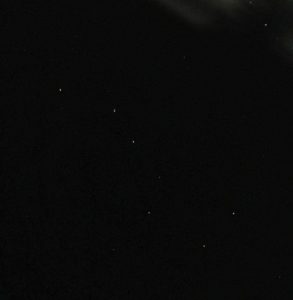 That was 8 months ago and I usually take a few pictures with the camera each time I head out after dark and the skies are clear.  This one was taken at the Mount Kobau Star Party this July in the early morning hours: 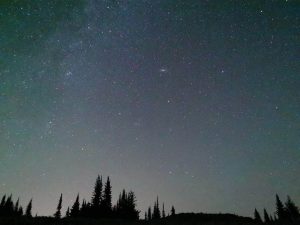 I used a Tripod with the camera mount from a selfie-stick to take steady shots that are needed in the dark for the best results, and voice activation to take the pictures.