Search for Comet PanSTARRS in 2013

Grace and I are having a lot of fun with this comet.  It appeared in our sky’s over Calgary at the beginning of last week.  March 12th was the first evening when a significant number of people were said to have observed it.  We did from Nose Hill Park in Calgary.  Both with our 20×80 mm Binoculars and also with our Camera in a tripod and a wide angle lens. 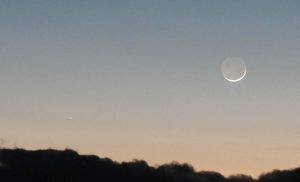 We had a chance to repeat this on March 18th from a spot near downtown Calgary.  Should prove an interesting object to see for the next couple of weeks.

and later out by Cochran, Alberta